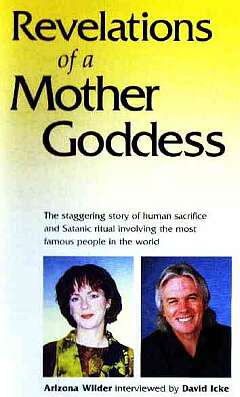 Born Jennifer Ann Greene, Arizona Wilder first came to prominence with the release of David Icke’s The Biggest Secret, as rare “evidence” (quotes used advisedly) for his theory that the world is dominated by shape-shifting reptilians from other dimensions. The book’s index has the entry, “Wilder, Arizona – see Mother Goddess”, and she describes human sacrifice rituals involving the Pope, the Clintons, the Reagans, both George Bushes, various members of the Royal Family, and, er, Bob Hope. These summoned “snarling, hideous creatures” – how they distinguished them from participating politicians is unclear.

Here’s her description of the Queen: “I have seen her sacrifice people and eat their flesh and drink their blood. One time she got so excited with blood lust that she didn’t cut the victim’s throat from left to right in the normal ritual, she just went crazy, stabbing and ripping at the flesh after she’d shape shifted into a reptilian. When she shape-shifts, she has a long reptile face, almost like a beak, and she’s an off-white colour.” [David Icke, The Biggest Secret, p.455]

You can get a videotape of an interview with her, but for those not willing to contribute directly to her finances, an opportunity to see Wilder speak occurred at the 2003 Conspiracy Con in Santa Clara. I went in sceptical, but with an open mind – despite a desire to give her the benefit of the doubt, unfortunately, I came out convinced that her claims have no basis in objective fact. Though if any of it is true, her life has been a harrowing one. She was born with her destiny as a cult figurehead already predetermined, and was ritually abused as part of her indoctrination. This included trips to Moscow as a young child, where she was immersed in cold water to bring on near-death experiences which would awaken her latent psychic abilities, and her chief handler was Nazi scientist Joseph Mengele.

These creatures who rule our planet can’t enter our dimension on their own; they need to be anchored here with a sacrifice, and need adrenalchrome to keep them in human form. This chemical only comes into the blood when the victim has been tortured and traumatised – Arizona’s job was to preside over the ceremonies and act as a conduit for the reptilians.

In her role as a “mother goddess”, she was scheduled to be killed at the age of 52, by her daughter, who would then take over the role. [Does this mean Arizona killed her mother? I suspect not – must be some kind of reptilian loophole there. Handwave, handwave…] But after Mengele’s death in the 1980′s, the psychological noose around her neck loosened, and she escaped the cult’s clutches, going into therapy. [Another warning sign, given the ability of therapists to make anyone believe anything] Subsequently, she’s been harassed, beat up, and even drugged – a test showed positive for cocaine even though she claims never to have taken it.

Well, where to start? The complete lack of corroborating evidence she provided, to begin with – for example, the alleged beatings become less significant given her admission that she has engaged in self-mutilation. You might think that with so many years operating at the highest levels of the global conspiracy, she would have some proof: photos, documents, anything. No. Not even a shape-shifting paperclip. We have only her testimony to go on. My rule of thumb is that the more outrageous your claims, the more I require to back them up. Wilder rates a 10 for outrageousness, but there’s more convincing support for pixies and unicorns than for her view of the world.

She claims to have been one of only three mother goddesses in the world. This, and how she was trained by Joseph Mengele himself (though could she tell us with any degree of authority what he looked like?), reminds me of the way that mentally ill people always believe themselves to be Napoleon, never Napoleon’s boot-boy. Given Wilder herself puts the number of ‘programmed’ individuals in the United States alone at ten million, the odds of her being such a high-ranking figure are ludicrously high.

Of course, the programmed include her parents and sisters – presumably a defence against anyone tracking them down and hearing their denials. Tied in with her supposed high-level role, her family are no commoners either, but “bloodline” – related (illegitimately, naturally – any ‘proper’ connection could be easily investigated) to the Rothschilds, and originating from the South of France. Yes, throw some Holy Blood and the Holy Grail into the mix, though you may be forgiven for feeling Wilder’s universe is closer to Monty Python and the Holy Grail.

I’m far from the only doubter: former Icke associate Ivan Fraser wrote in an article that, “her facts were either regularly wrong, or so full of spin that she was hardly credible.” He also mentions Wilder’s claim that the royal lizards change back when they sleep, which must have made Prince Charles’ time at Gordonstoun public school and in the armed forces very entertaining for those sharing his sleeping quarters…

The most charitable explanation is that she was indeed abused horribly as a child, and her psyche has latched on to Icke’s reptilians as a way to rationalise her suffering. Under this hypothesis, she truly believes what she says. Slightly less kind, she could merely be an attention seeker who loves the sympathy of an attentive audience, and finds making outrageous claims a good means to that end. Worst of all…well, if someone out there actually is engaged in mind-control work (and that is not as far-fetched as you’d like to think), what better way to cover it up? Make wild, ludicrous claims, linking the topic to trans-dimensional aliens, Nazis and Satanists, and the general population will eventually believe it to be the domain of cranks and kooks.

In this light, I am particularly curious about Wilder’s minder, the unseen “Miss Pinky”. What is her precise role? Wilder isn’t the only one to have such an associate lurking nearby – Cathy O’Brien, another alleged mind control victim, is rarely seen outside the company of ex-intelligence agent Mark Philips. Another figure of interest is Brian Desborough, who may have directed David Icke towards the reptilian theory, and subsequently introduced Wilder to him, a convenient “witness” to back up the facts. Perhaps significantly, Desborough has written articles on mind control.

By writing this piece, I probably become part of the conspiracy against her, and my claim to be merely a sarcastic, sceptical Scotsman should be viewed with scepticism. However, she claims to be serving her purpose and destiny, and so I guess I’m just doing the same thing by treating her story with the suspicion it deserves. Her presentation at Conspiracy Con was entitled Deceived No More – but does that more accurately apply to the speaker or the audience?

Ring Of Power – Connecting the Dots

Part 2 has been BLOCKED world wide - SORRY !!! (see last video below for last chance at part 2) This is a 3 hour (2 part) documentary film, which took almost a full year of my life to complete. It not only exposes ...

1967 Myron C Fagan: The Illuminati & the Council on Foreign Relations

This two and a half hour speech by Myron C. Fagan from 1967 completely exposes who the Illuminati are and how they “did it”.  Stole our everything through deception.  Our money, our justice, our education, true histor...

The more humanity strays from its’ origin, the more we deny our bond with nature, the farther from perfection we become. We are the only creatures on the planet that use symbols in reference to something else. This do...

Fritz Springmeier explains his studies from over the years of the Illuminati and the top 13 families that rule it.

National Geographic - Cia Secret Experiments (Documentary) It's the height of the Cold War and the United States government is desperate to combat the spread of Communism. The CIA launches a highly classified, top se...

Mind Control through Tv and the Children {Documentary} The greatest form of control is when you think you're free when you're being fundamentally manipulated and dictated to. One form of dictatorship is being in a...

Programming the Nation - 2011 Documentary According to many authorities, since the late 1950's subliminal content has been tested and delivered through all forms of media, at an increasingly alarming rate. "PROGRAMMI...

Brice Taylor & Ted Gunderson - MKULTRA Mind Control Revealed: The True Story On video, Brice Taylor tells how she was conditioned through trauma in order to be MIND CONTROLLED AND USED BY TOP GOVERNMENT OFFICIAL...